Meet the Co-Founders of Diversity in National Security Network!

Asha Castleberry is a national security expert, university professor, military veteran and media commentator.  She is Lecturer at George Washington University teaching U.S. Foreign Policy and National Security.  In 2015, Asha completed a 30-month deployment in the Middle East. Since the 2014 ISIL incursion in Iraq, she served for Combined Joint Task Force-Operation Inherent Resolve in Iraq and Kuwait. From December 2012 to June 2014, Asha served as the Kuwait Desk Officer for International Military Affairs, U.S. Army Central. During the Obama Administration, she worked with the U.S. Mission to the United Nations at the State Department working on peacekeeping issues in the African Continent.  She has been featured or quoted in many outlets including CNN, Fox News, CNBC, Washington Post, Washington Times, The Hill, Al-Jazeera English, I24 News International, Lima Charlie News, Uptown Magazine, Elle Magazine, The Root Magazine, and Forbes.

Laura Kupe is a multilingual attorney with foreign policy expertise in think tanks and the Federal Government, including the U.S. House of Representatives, the RAND Corporation, the Department of Homeland Security, and the White House. Laura’s subject-matter expertise ranges from U.S. engagement with the European Union (EU) on topics, like migration, maritime security, transportation security, and counterterrorism, to Air Force manpower and personnel matters. As a Congolese-American, Laura is passionate about advocating for the inclusion of diverse communities and perspectives in U.S. foreign policy, knowing the great insight, talents, and experiences these communities possess firsthand.

Camille Stewart is a cyber and technology attorney with substantial business, legal and policy experience including serving in the Obama Administration, on Capitol Hill, and across the private sector at major companies like Google and Deloitte. Camille brings specialized, crosscutting perspective to bear on complex technology, cyber, and national security and foreign policy issues. Camille is committed to advancing the representation of the myriad of voices and lived experiences of the American people; representation in our national security and foreign policy apparatus is a national security imperative. Camille dedicates much of her time to empowering others and making room for all voices in the national security, foreign policy, and tech sectors.  Learn more about her work at http://www.CamilleStewart.com.

Meet the 2020 DINSN Advisory Board!

DINSN Advisory Board Members lead a strategic effort as part of their one-year appointment. 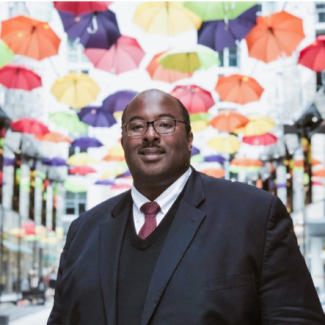 Marcus Coleman is a active contributor to building the nations resilience through leading stakeholder engagement efforts in the areas of emergency management and religious affairs.

Marcus co-developed the guide, Engaging Faith-based and Community Organizations: Considerations for Emergency Managers, FEMA’s course on Religious and Cultural Literacy and Competency in Disasters and led a nationwide effort to increase the safety and security for houses of worship.

Deputy Director of the Rangel Fellowship

Bunmi Akinnusotu is a first-generation American who spent countless hours listening to her Nigerian relatives argue and debate world politics. Though born and raised in the rebel state of Rhode Island, the idea of a world outside of America has always been part of her consciousness and is the motivation behind this show. She’s got lots of degrees, worked for amazing organizations, and smiles at a dope Excel spreadsheet.

Bunmi is a recovering collegiate volleyball player, the world’s biggest Nina Simone fan and still has a love affair with Chicago.

By day, she is the Deputy Director of the Rangel International Affairs Program at the illustrious Howard University. In the late hours, she is the Host and Producer of the foreign policy podcast, What in the World? (@WITWPod) and Producer of her church’s podcast, Saved-ish (@Savedishpod).

Cliff grew up in Kalamazoo, MI and received his B.A. in Global International Studies from Western Michigan University in Kalamazoo, MI. As an undergraduate, he had the opportunity to study abroad six times, including to Singapore and Malaysia, Chilé, China (twice), Italy, and Uruguay. After graduating, he worked as a Project Manager in China for Whirlpool Corporation.

In addition to his studies in the Master of Science in Foreign Service (MSFS) program, Cliff serves as the community co-chair for the Diversity and Inclusion Group. He is particularly interested in international negotiations, trade, and Asian studies.

Cliff hopes to pursue a career in public diplomacy and service. He speaks Mandarin Chinese.